This year the CMRCA team decided to head back up to the Doi Angkhan area in Northern Thailand for the 5th annual caving expedition. Last years trip took us down the Elephant Tusk Cave, named so because of the giant elephant tusk that was found about a third of the way down. I was able to get a pretty rough survey of the cave system and had plans to survey more.........but the river just petered out under a giant wall.

Anyway, this year I have had the opportunity to meet a caver by the name of Angela, who moved to Chiang Mai originally to teach English but has since forfeited gainful employment for more liesure pursuits underground. Angela has over 30 years of experience in cave systems around the world, so we all tried to learn as much from her as possible, including how to survey properly.

The goals we set this year were to get into Tham Pha Daeng, which had been previously explored on a prior expedition but met a dead end at a giant flow stone wall. The following were our objectives:

1. Place titanium glue in bolts at every pitch, including re-belays
2. Create a Grade 5 survey of the cave system (thats where I came in)
3. eh those were the main ones, oh and to come out without injury

I was only able to stay half of the trip due to staffing issues at the shop, but below are some of the photos I was able to snap. It also happened to be Josh and Mario's birthday in that time frame so we celebrated roughly 150 meters down. 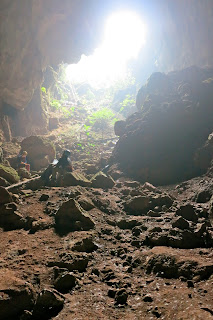 Ok, so there was a previous survey done and this was their map, we went much deeper than them and had better instrumentation. Still working on the sketch and hope to have it done soon. I have also started using this archaic cave mapping software called Survex (I thought the name was a joke at first, its not) Below are some of the 1980's DOS style projections, GIS eat your heart out.

Now, now, now there are more pictures to come, just need to get them up on here, so stay tuned. Oh, and we made a harlem shake video which is in the editing process right now........just saying.